Archisle 1 Open Photography Exhibition opened on Friday 16 December, briefly closed for the holidays, and is now open again weekdays and Saturdays until 31 January 2012. The venue for the exhibition is 7 Pier Road, St. Helier, Jersey, C.I.

Anyone who can physically get to 7 Pier Road, Jersey, between now and the end of January, and who loves photography, should see this exceptional show where some of Jersey’s most interesting photographers share space with a diverse selection of international artists.

The exhibition can also be viewed online at www.archisle.org.je 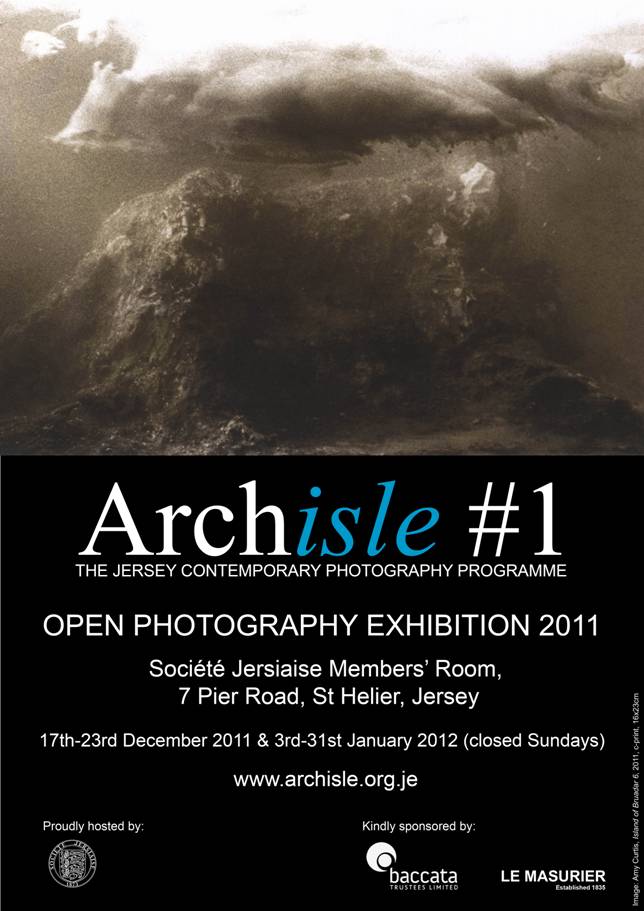 Archisle is a project hosted by Société Jersiaise to promote ‘contemporary photography through an ongoing programme of exhibitions, educational initiatives and commissions.’

Workshops in Jersey took place from April through July, with three groups each attending two days of presentations and group discussions. I was among those signed up for the middle pair of dates 2 and 9 July 2011.

Gareth Syvret, photographic archivist at Société Jersaise, led the workshop with A Short History of Photography. The structure of presentation allowed a generous, relaxed story to be made of a historical tour, with pauses to examine details and curiosities along the way. This was a superb introduction to the subject enriched with a projected visual display featuring many wonderful items from the Société’s archive.

Mark Le Ruez, Berlin-based artist, complemented Gareth’s history-potting with a close examination of some key contemporary photography-using artists, and fielded group discussion throughout. There were valuable things to be revealed – some of the practical methods of the artists as well as insights to artistic expression coming out of mundaner doing and living. Richard Billingham’s breakthrough tableaux of the indoors, resembling grimy, hyperreal sitcom stills, received special attention as did Sally Mann’s powerful portraits and landscapes drenched in mystery.

Group members were asked to prepare three images to discuss in the second session: One new image as response to the theme of islandness; one image from their personal archive; one image by another photographer. These presentations and discussions of them formed the central exercise in the second workshop. I was impressed by how easily and well each person addressed the group, talking interestingly at length about making and choosing their pictures. There was guidance towards preparation for planning and realizing submissions for the open competition, as it grew clearer that modes of thinking I can only call critical philosophies were being introduced, generously and gently, to our conference.

That week-long phase of creating work to analyse it was of great assistance to those of us who later submitted to the open call.

Fast-forward to mid-December 2011: The winning works were announced at the launch of the show. The evening was a good one, with cosy pre-Christmas atmosphere helped along with mulled wine and a full house. Cynthia O’Dell, second place award winner, and Lucian Bran, first place award winner, were not present and so accepted their prizes by means of digital video. Their virtual presence made for one of the more theatrical, touching moments of the evening. Cynthia O’Dell garrulously chatted to us the unseen about her project of bringing images of her relatives to their native country to undislocate the past to the present. Lucian Bran kept things briefer, and was no less charming. His photographs are from the series Alien Structures examining ‘architectures that disturb or interrupt familiar forms in the landscape’. The delicate views of backwoods of Romania and, and in one triumphantly enigmatic image of landscape placed in a space of ambiguous, Magrittian reality, with their quiet, uncanny atmospheres, seem to recall the revolutionary spirit of surrealist image making.

The exhibition room is grand and large with lots of floorspace balanced with the lavishness of its furnishings. The modern, vibrantly various photographic collection on the walls adds to the visual mix a delightfully riotous experience as one explores intersecting sequences of images.

A rich essay to accompany the exhibition, Archisle 1: An Introduction, by Gareth Syvret with Mark Le Ruez, contains penetrating analysis of the winners’ work and statements as well as looking in detail at several others in the exhibition. It’s a wonderful piece of writing given to exhibition visitors, and, so far as I know, not published in any other form. Its authors state that it is obvious that ‘the distinctive physical geography and the political and cultural development of the island of Jersey are intertwined.’ The 2011 brief, inviting observations of ‘islandness’, resulted in an abundance of poetic mystery, metafictions, historical resonances and visual novelty, as Gareth and Mark explain, ‘Islands of fact and of fiction have surfaced in the submissions to our 2011 open call; islands of the earth and islands of the mind.’

Below is a quote from Archisle‘s mission statement as they advance, in this period of exponential hyperconnectivity, to a synthesis of all islanders’ common experience in photographic art and the enlisting of something like an avant-garde cultural research community.

The Islands of the World V International Meeting in Mauritius on 4 July 1998 recommended, ‘that islanders speak and others hear the unique and positive cultural experiences of island living through literature and other forms of creative expression.’ Taking up this assertion and analysing the challenges and opportunities for island art Peter Hay has observed that:

‘In a stressed world, islands are under particular stress. At the same time – as the global economy becomes more and more tightly controlled from the centre – it may be that it is only at the fringes that the necessary “critical distance” will be found that enables the envisioning and generation of real and radical alternatives to taken-for-granted existence. Despite the inflexibility to which islandness has conduced in the past, then, it may be that in the future islands will be crucial sites of inquiry, even of resistance.

‘Island arts engage with the land and the sea (of course!) and the community. They address the large questions of existence, but they do it within a context of shore-bounded particularity. They are, in reality, not “minor” arts at all, and island artists are, in reality, not workers at the margins. So should it be recognised.’

Through Archisle we seek to create a space for creative discourse between Jersey and international artists on and about island experiences. The readings presented here and the yet to be told interactions between present and future participating artists and their audience reveal the tremendous creative potential of beginning this discussion.